Questioning The Premise Of Testing

I'll go straight to business. Not long did the 2016 last before another round of questioning testing started. This time however it was started by someone who I thought to be knowledgeable about the premise of testing and the relevance of it. Here's the tweet:

I fail to understand the purpose of this kind of tweet, but at least it stirred some thoughts.

"So you think you can test?" 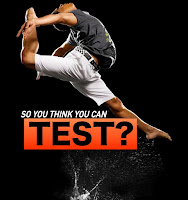 Heyhey, the bear has awaken!

It's been too long and I don't want to bore you with stories about diapers and work, even though they are plentiful. Well, something about work. This is a testing blog and I'm a tester after all.

Two things ignited my resolve to write something for your pleasure, dear reader. Firstly, Eeva Pursula gave me an inspiration with her blog. Secondly, I read Simon Knight's Linkedin article about challenging interview questions for people in testing and QA and felt like saying something more than what would fit into a comment field. Don't get me wrong: There was nothing wrong in Simon's article, but one of the replies caught my attention...

From space to happiness

Many have wondered what's going in my life. I haven't been blogging and even my Twitter and Facebook feeds have been quieter than usual. Well, I've been a bit busy. The best year of my life is closing to its end and I wanted to finally recap what really has happened. So fasten your seatbelts, people. It's going to be a wild ride. :)

It all started on January. Well, the year usually does. The momentum that separated me from Sogeti Finland. I have my personal and professional values, and while they have usually fitted wonderfully into surrounding environments, they never quite fitted into Sogeti. I tried. I really tried. At times I even questioned my integrity while trying to adapt to the world of Sogeti, but ultimately I started separating myself mentally from it. And finally, after four years of trying, also physically.

Some have said that I should've stayed, because Sogeti can be changed only from within. I agree, but I believe the majority: I've appeared much happier after leaving. And I actually AM much happier now. One of the reasons might however be that I'm a father now...

It's ok to be wrong

I had an interesting chat with my wife just a moment ago about whether the school kills creativity or not. The discussion was a bit biased because a lot of her professional success is because of her education while I find only little or no connection between my professional success and my education. Ultimately the situation passed the threshold of me writing a blog post about it. 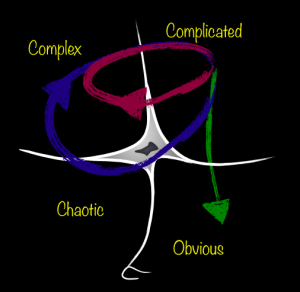 Belgium Testing Days 2014 took place a couple of months ago. Again, it was a heart-warming experience filled with good times among the best in our industry. Lots of old friends, some new ones and loads of knowledge shared. I think it's safe to say that I loved every second of my stay in beautiful Brugge.

One of the absolute highlights was Lisa Crispin's workshop about changing testing mindset. There's too much to recap from that workshop so I'll just concentrate to one of the subjects that has become increasingly popular among my colleagues, especially in Agile and Lean circles: namely Cynefin.

Read more »
Posted by Sami Söderblom at 1:08 AM 1 comments

Last November I took the BBST Bug Advocacy course and even though it was quite a lot more demanding than Foundations, somehow I managed to pull it off. Unfortunately I don't have the time to write full recap of it. Instead I'll concentrate to one of the best mnemonics since SFDIPOT, namely RIMGEA.

Bugs are an integral part of testers' work and the information we produce, and RIMGEA is a kick-ass heuristic of how to communicate bug related information to stakeholders. It's copyrighted by Cem Kaner and dissected as follows:


There are some blog posts about this subject, but I wanted to present my take on it. So let's get to it then.

Christmas is almost here and I'm feeling all Christmasy! People start to wind down, christmas lights spread calm ambience, the smell of hyacinths and swastika pastries fill the air... This is my 36th Christmas and I'm still getting my kicks out of it. I love joining with my friends and family, talking with them in peace, having nice meals with them, enjoying few cold ones in sauna with them, and ultimately just being with them longer than just the short weekend. It's safe to say I love Christmas.

One imporant part of this social event are the presents. I love giving them to those I care about, and of course I love receiving them at least as much. The anticipation before receiving them and the joy of opening them is something that brings me back into childhood. The theme of my presents may have changed (except for the Star Wars part), but the childish joy is still there. If you pay attention you might catch some real emotions, perhaps a tiny giggle too when I'm opening presents. That's rare in a Finn. Catch that s**t and put it in a bottle. ;)

Christmas presents lead us to our topic of the day: Christmas arithmetics.

I've been designing my new heuristic test strategy model. Mary Gorman's keynote in Agile Testing Days 2013 gave me some ideas on how to develop the viewpoint on product elements. For a long time I've been using James Bach's SFDIPOT and it has served me wonderfully, but I think I need to try something different. I need to evolve.

Agile Testing Days 2013 ended a week ago. I have some time between BBST Bug Advocacy assignments so let's get to recap before I forget what I experienced in this wonderful conference. So much awesomeness happened that I'll have to sample a bit.

Let's get to it then!

Read more »
Posted by Sami Söderblom at 1:01 AM 4 comments

The Tao of Testing

For some time now I have had a constantly growing interest in Taoism. Don't get me wrong; I'm not in it for religious reasons. It's not about higher powers or entities that should be followed or even worshipped. It's just something that resonates with the values that I have and the way I see the world. In work, freetime, jujutsu, etc. I constantly see connections and analogies to Taoism.

How Taoism turns into testing is a fascinating mind game. Let's play some of that, shall we... ;)